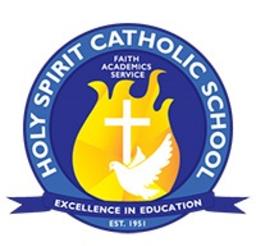 ​Holy Spirit Catholic School, in adherence to diocesan policy, hopes to accept students who seek a religion-based education. Students will not be denied admission on the basis of race, sex or national origin.

As Catholic educators of Holy Spirit Catholic School, we, in partnership with parents, strive to provide each student with the opportunity to acquire a personal relationship with Jesus in an atmosphere alive with the spirit of God.  Believing in the uniqueness and value of each individual, we encourage each student to develop a strong, positive self image by providing and expecting a Christian atmosphere characterized by understanding, respect, and acceptance of all people.  We also believe that every child is capable of learning moral values and self-discipline skills.  We emphasize the importance of individual potential, academic achievement, intellectual and aesthetic growth.

We hope to teach and model behavior which will allow our students to develop the skills to become self-disciplined, reflective, discerning Catholic Christians who are eagerly committed to building the Kingdom of God and bringing the Good News to the world today and into the next century.

Our staff believes that every human being had the right to attain knowledge within his/her own abilities regardless of background, race or sex.